5 surprising ways how to use crypto in the real life

How many times you’ve already heard “it’s useless in the real world!” kind of stuff?

We've all been there – arguing with others about crypto. Ughhh, I know! Whether it is online, with colleagues, or even at home. No matter what, discussions of such nature usually spiral towards questioning the good old trio: volatility, security & utilization. This time, let’s tackle the latter one.

There are indeed a tremendous amount of ways to utilize your crypto, YES even in the real world, let’s browse through some of those that may surprise you.

1. Payments - get yourself a cryptoburger

The country of El Salvador, later joined by the Central African Republic are currently two countries accepting Bitcoin as a legal tender. Their bet on crypto lately had to face backlash due to the value of BTC dropping significantly since its adoption in said countries, though the innovation and overall sweeping changes towards digitalization among the public in El Salvador are still considered a great and ongoing success.

Understandably, not everyone feels like straight up moving to El Salvador or Central Africa, luckily there are still other ways to pay with your crypto, for example:

• Burger King and Pizza Hut in Venezuela accept all major cryptocurrencies such as Bitcoin, Litecoin, Tether and BNB in collaboration with south American provider Cryptobuyer. “Have it your way” indeed!

• Microsoft lets you top up your Microsoft account, the same is possible for PayPal

• you can treat yourself in thousands of places across the world whether it’s a slice from Helen’s Pizza (New Jersey), coffee from Paralelní Polis (Prague) or just paying for beers in Pembury Tavern (London), Old Fitzroy (Sydney) or The Pink Cow (Tokyo). 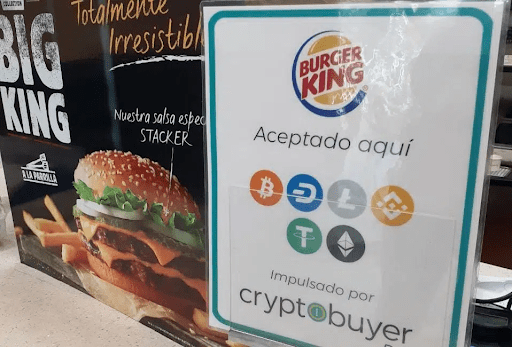 In Venezuela, Burger King and Pizza Hut accept all major cryptocurrencies such as Bitcoin, Litecoin, Tether and BNB in collaboration with south American provider Cryptobuyer

The general crypto public is quite exhausted from hearing about NFTs. Instances of scams, questionable practices and odd projects are nothing unheard-of.

Not only overhyped Bored Ape Yacht Club, but even the big corporations like Adidas*, Coca-Cola, Gucci, Louis Vuitton, McDonald’s, Mercedes, NBA and Nike pocketed some serious funding for their NFT projects and collabs. Of all these brands, Lamborghini at least brings a certain connection with reality, since token holders can only access their NFTs through the ownership of real physical keys.

A genuine real-world experience might be delivered through Fat Cat NFT. Each token holder is granted access to an actual physical location private members’ club. A grand total of 2,222 tokens are issued for a floor price of $15,000.

It is considered a gentleman’s club for ultra-high net worth and like-minded individuals with a passion for art, investment and technology, though some might reckon it is just an overly complicated way of getting together with your cigar buddies.

*in collaboration with Prada

Your crypto can even land you some education, believe it or not.

It is possible to pay tuition fees using cryptocurrencies (mostly with BTC) at these universities:

• The University of Cumbria, United Kingdom

and a few more in Australia, Germany, France, Cyprus, Bulgaria and Vietnam.

Even some universities that didn’t fully embrace the crypto trend yet, like Simon Fraser University in Vancouver, BC and MIT nevertheless allow their students to purchase books and study materials in official university bookstores using crypto.

It was a banger of news within the crypto industry when travel agency giant Expedia announced in 2014 that it will allow its users to pay for their travels using cryptocurrency. Unfortunately, this feature has been discontinued in the year 2018.

Why the long face? A company named CheapAir.com lets you pay for your journeys using crypto even since 2013, long before Expedia made the news.

Heard about Travala? Another travel portal that allows you to utilize your precious BTC and ETH in exchange for some travel adventures. These guys in particular play no games, mainly because they are backed by Binance themselves.

A truly notable mention within the “travel” category is Richard Branson’s space project Virgin Galactic letting you pay in Bitcoin for your space flight.

5. Sports - no FIAT needed to see the game

Cuban said the team had chosen to accept Dogecoin "because sometimes in business you have to do things that are fun, engaging and hopefully generate a lot of PR." The Mavericks also use the previously mentioned platform BitPay to process its all crypto payment options.

Probinex is a proud sponsor of famous football club Zbrojovka Brno. Utilization of PBX in collaboration with our beloved team is not out of the question.

A similar approach of utilization has been taken by legendary Portuguese football team Benfica Lisbon.

Probinex project is a proud sponsor of famous football club Zbrojovka Brno, currently smashing the top ranks of the Czech national league. Are we about to witness some utilization of PBX in collaboration with our beloved team? It’s easier said than done, but never say never!

December through the eyes of a Quant

To make it easier for you to browse the site, offer personalized content or advertising, and be able to analyze traffic anonymously, we use cookies that we share with our social media, advertising and analysis partners. You can adjust their settings via the "Cookie settings" link and you can change it at any time in the footer of the website. You can find more detailed information in our Privacy Policy and the use of cookies. Do you agree to the use of cookies?

They mediate the basic functionality of the site, the website cannot function without them.

They count website traffic and, by collecting anonymous statistics, allow the operator to better understand their visitors and thus constantly improve the site.

They gather information to better tailor advertising to your interests, both on and off this website.